After a bad motorbike accident in Liberia I came to the USA for tests and treatment.  Praise God, my body has healed and appears that there is no permanent damage.  Thank you for your prayers.   I expect to return to Liberia the first of November.

In September our team in Liberia went on 21 missions trips into 4 counties visiting 33 communities.  We did 5 regional 3 day workshops and showed the Jesus film 6 times.


Our Lord has expanded our vision below is the vision and the plans for accomplishing the vision.


Vision and plans to send out missionary teams

Matt 28:18-20, “Then Jesus came to them and said, “All authority in heaven and on earth has been given to me.  Therefore go and make disciples of all nations, baptizing them in the name of the Father and of the Son and of the Holy Spirit, and teaching them to obey everything I have commanded you. And surely I am with you always, to the very end of the age.”


Acts 1:8, “But you will receive power when the Holy Spirit comes on you; and you will be my witnesses in Jerusalem, and in all Judea and Samaria, and to the ends of the earth.”


The mission of WSL is to see a healthy church in every village in this generation so that every Liberian would be able to walk and find a healthy church.  I believe our Lord has enlarged the vision and plans of WSL.


Our Current Situation
Listed below are statistics concerning Christianity and Islam.


•          Christianity is by far the world's largest religion, with an estimated 2.2 billion believers, 31 percent of all 6.9 billion people on Earth.  Islam was second, with 1.6 billion, or 23 percent of the global population.


•          By the middle of this century it is predicted that Islam will grow by 73 percent while Christianity will grow by 35 percent — resulting in 2.8 billion Muslims and 2.9 billion Christians worldwide.

North Africa is directly above Liberia.  Liberia is located on the West coast in dark blue directly below the green.  All of North Africa, marked in green and is part of the “10/40 window”.  Below is a partial list of the religious status of some of those countries in North Africa. 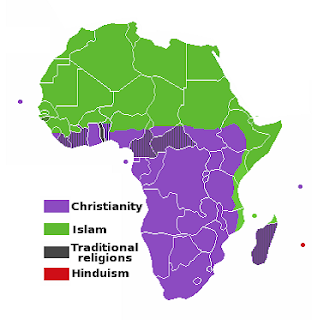 
We have been working in the country next to us on the East side, Ivory Coast.  They are 40% Islamic, 26% Christian and 14% traditionalists.  Islam is growing faster in Ivory Coast then Christianity is.  The country North of us is Guinea and is 85% Islamic.  To our West is Sierra Leone and they are 71% Islamic.

It has been stated by the fanatical ISIS leader, Boko Haram, that one day soon every West African nation will become an Islamic nation.

The Vision
The above verses are mandates of our Lord for His Church.  WSL would like to form and send out trained missionary teams, as the Lord leads and enables, into the unreached tribes of Liberia, North and West Africa.


The Plan
WSL has a Bible institute that teaches 4 levels.  The completion of each level consists of attending a 2 week class on our base in Zwedru.  Level 1 teaches the basic doctrines of Scripture.  Level 2 teaches about being a disciple and raising up disciples.  Level 3 teaches about the NT church and how to start a church.  Level 4 teaches about having the mind of a missionary and becoming a missionary.


Students that completed all 4 levels and felt the call of God to be missionaries would submit an application to the board of WSL.  If approved the candidate would live on our base for 3-8 months.  We can house at least 15 unmarried students and 3 families.  While residing on our base the candidates would receive daily training.  They would assist in the running of the base, teaching in our Bible Institute, going on missions, forming into teams of 2 and start at least 3 churches.


Acts 1:8 will be our formula.  “But you will receive power when the Holy Spirit comes on you; and you will be my witnesses in Jerusalem, and in all Judea and Samaria, and to the ends of the earth.”


·         Their “Jerusalem” is their home town.  They will have been fruitfully ministering in their home town during their attendance of levels 1-4 of the Bible Institute.


·         Their “Judea” would consist of forming a team of at least 2 and going out to start at least 3 churches while living on our base in Zwedru as a missionary candidate.


·         Their “Samaria” is when they are sent into the unreached tribes of Liberia.  It would be expected that they would start several healthy churches within their God assigned tribe.


·         Their “ends of the earth” is when, as our Lord assigns, they are sent into North or West Africa to start churches as missionary teams.

Please join us in prayer.  Pray that we may forcefully advance and clearly proclaim the Gospel of Christ.


Matt 11:12, "From the days of John the Baptist until now, the kingdom of heaven has been forcefully advancing, and forceful men lay hold of it."
Col 4:3, "And pray for us, too, that God may open a door for our message, so that we may proclaim the mystery of Christ... Pray that I may proclaim it clearly, as I should."


.
Posted by Wordsower International at 9:54 PM No comments: