Our Weapons used in May:

Praise God!!! Our printing press is running great after being either completely down or printing terrible for 6 months. Our Lord called in reinforcements from Sidney, Ohio, Lee Trisler and Doug Billenstein. They sacrificed financially and physically. Often we worked long hours going from one discovered problem to another and then to another. The problems were many and far greater than I would have been able to fix. The press is now running perfectly, printing with great quality! Today we printed over 12,000 pages. The press is one of our most powerful weapons. Surely, there are none that print and distribute more material that are given freely to Liberians than we do here in Liberia. Our material is in every county and in thousands of villages, towns, and cities. Disciples use it to train disciples who then go on to train others. Many disciples have been trained through our material that we will never meet. We the team of WSL throughout the world say, “THANK YOU to Lee and Doug!!!” 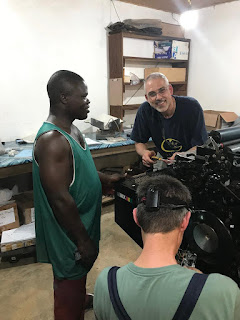 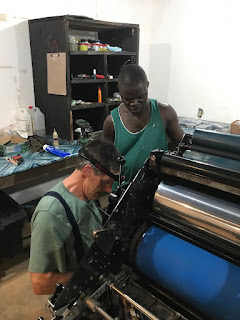 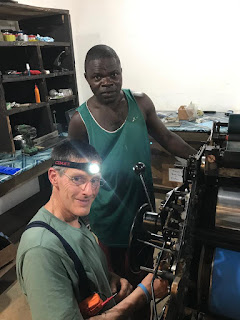 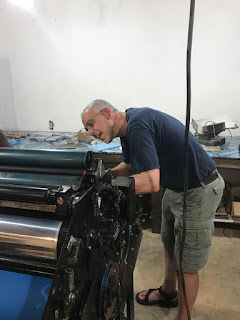 Wordsower Liberia goes deep of the Liberian rain forest finding small isolated villages. But, these villages are not forgotten of our Lord. Often when we arrive, we see that He has prepared us and those we minister to. Below is a testimony of one such trip told by Badio Yarl.

The battle:
The establishment of the Tochoso Mission was mandated by God, through Ma Eliza Collins. God clearly told her to build a town where people who have different problems were to be healed and delivered from evil destruction. So, in 2007, she made a farm where God directed her but did not settle there. After harvesting and storing the rice in a tent on the farm, they went to town. When they returned, someone had burnt the tent and rice.

Evil people rejoice…but not for long:
When the news reached the two towns, everybody was laughing and saying, “we told her not to make farm there.” She replied, “God spoke to her.” Where is her God? Those who were laughing had no understanding about the power of God. In John 16:20 Jesus said, “I tell the truth, you will weep and mourn while the world rejoices. You will grieve, but your grief will turn to joy.”

Ma Eliza said, “God asked me, ‘Did I tell you to go and make farm? I told you to go and settle down, not to make a farm.’” On June 20, 2008, according to Ma Eliza’s testimony, on a rainy night the Lord told her to leave immediately; to go and start the mission. She told her husband Francis that night that the Lord mandated them to go to Tochoso and set up His mission. At once she left everybody and set out. Later they followed her. People told her that she wanted to die, but the Lord told her “as long you will do everything I command you then have no fear.”

In the town of Gbaken, one of the two towns, women were dying on a regular basis during child birth. One day God spoke to Ma Eliza that she needed to rescue the people of that region. So, God commanded her to lead a three day fast and prayer. In obedience to the command, she asked the whole town to join in the fast. At the end of the fast and prayer, men whose wives were pregnant wanted to carry them elsewhere before their delivery time. Ma Eliza ensured them that none of those women, according to what God told her, was going to deliver with complication. Indeed, God worked through the prophecy and all the women delivered peacefully.

Ma Eliza said she has been guided by the Holy Spirit. Everything she does is based exactly on the directive of God. Many times she is under spiritual or physical attack, but God can reveal to her the best approach regarding every attack.

God led us to Tochoso:
Our water filter distribution team works in Maryland County and we were scheduled for our one-week Bible school class for Maryland. Usually we have the training in the county’s big city to allow our team to get supplies and for the increase of attendance. Two months prior to the May 20, 2019 training, the Lord laid on our hearts to contact the Maryland WSL filter team to choose a place. They chose Tochoso, a village that has 13 houses and 15 family heads. The road leading to the town is like a hunter’s trail. On the bike, one of the students we were taking along asked, “I thought you said we are going to Maryland Capitol City, but this road looks like a hunter’s trail”. We almost fell down while laughing. Later she said, “Do not throw me down.” We just needed to keep the courage in order to give hope to those we were carrying, but we were also becoming discouraged. Entering the village, we had to push the bikes. Everybody felt bad coming into this small, isolated, poor village for the training instead of the county’s capital city, As we were getting down from the bikes we felt the joy of the Lord and praised Him. “For the message of the cross is foolishness to those who are perishing, but to us who being saved it is the power of God. For it is written: ‘I will destroy the wisdom of the wise; the intelligence of the intelligent I will frustrate’. Where is the wisdom of man? Where is the scholar? Where is the philosopher of this age? Has He not made foolish the wisdom of the world?” 1 Cor 1:18-20. So the Lord carried us to the place He wanted us, not the place we would have chosen.

To our surprise, over 40 people from two counties and some from Ivory Coast slept in the village the first evening and everybody had a place to sleep and enough to eat. The evening devotion was soul touching and we told the congregation that it was the first of its kind to have evening devotion during our schooling, because in the big city, everybody only meets in the training hall and then goes home. God put us in this village for a spiritual retreat. We worshipped, danced, sang, and gave testimonies until late in the evenings. The following day the number increased and the attendance was 76 persons besides the three teachers.

Indeed, Ma Eliza and her husband independently covered 90 percent of the feeding of the students from their farm. This year their farm is about 30 acres, fully planted from limited resources. During our last two days, the Tochoso Mission offered us all one male goat, six chickens and one duck. They were worth about $100!!! That is not small money here in Liberia.

Nine persons were baptized on the last day.

The Spirit of God is powerful on the Tochoso Mission. It is a place of spiritual retreat and renewal. When you enter the village through the hard hunter’s trail, you will always want to return. Everybody is welcome to Tochoso Mission according to Mr. and Mrs. Francis Collins. They need teaching and prayer support. 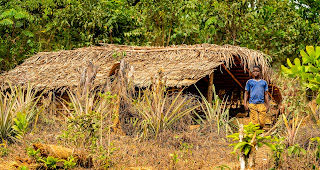 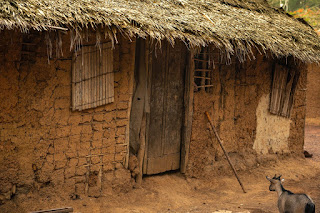 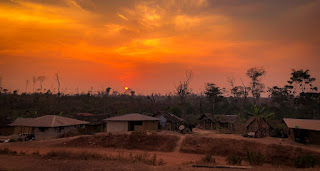 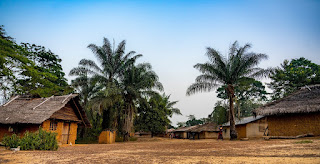 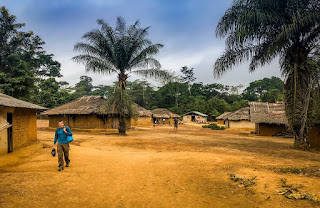 Participate with us in Praise and prayer:
100% of all donations go to the mission. None is used for administration. Tax-deductible receipts will be sent each January.
Please send donations to:
Wordsower International
16960 Sidney-Plattsville Rd
Sidney, OH 45365

Posted by Branton Hoblit at 10:19 PM No comments: