6 - Bases - 4 in Liberia (Zwedru, Grand Gedeh County; Sinje, Grand Capemont County, Voinjama, Lofa County and Gbarpolu County, 1 base in Ivory Coast, 1 base in Sierra Leone
18 - Total counties we ministered in
212 - Total communities/villages/towns/cities we ministered in
204 - Total mission trips
134 - Persons were baptized
28 – Attended the Wordsower Bible Institute level 1 class held in Zwedru, Liberia
13 – Attended the Wordsower Bible Institute level 1 class held in Ivory Coast
6 - Muslims confessed Christ
96 - Churches we visited and worked with
3,150 - Viewed the Jesus Film in 23 locations, shown 31 times
754 - Attended our 1-3 day trainings in 14 locations
4 - Broadcasting on community radio stations
13 - Dental patients, 24 teeth pulled
10 - Adult literacy school
86,000 - Copies printed, 139 booklets made (English)
The above report is made possible by a united sacrificial team here and abroad. Only in the unity
of us all can the above be a reality and even increase. We have spread across Liberia and are in
the neighboring countries where we evangelize, disciple and church plant.
Last month we went on 204 mission trips. A mission trip can last from a few hours up to a week. Each mission team returns with testimonies. I will mention just a couple from the hundreds we receive each month:

Testimony of a new disciple:

Mary is from the Tenme-Banta tribe in Sierra Leone. She is 28 years old. When she was 12 rebels captured her as she was swimming with some friends in a creek. The rebels took her to their base where they severely beat her, tortured her, burnt her with red hot metal irons, raped her and cut off her right hand. Miraculously, she was able to escape into the bush. For 3 days she hid alone, without food, water or medical treatment. She was found, near death, with bad infections, by a man who returned her to her family. Unfortunately, after several years and many operations her arm had to be amputated. Her family was Muslim.
A few months ago, our Sierra Leone indigenous missionary team called a meeting of handicapped amputees. They fitted prosthetic hands on 30 amputees (300 more are now being shipped to us for others). Mary was one of them that showed for the meeting. By now, she was already a baptized Christian. After the meeting she invited some of our team to her home to learn more about Wordsower. Her sisters were also there out of curiosity. For the next several months she, and some of her family, were discipled in our bi-weekly base meetings.
The Sierra Leone team invited the disciples to travel to Liberia to be discipled on our main base, in Liberia, for several months. Mary filled with passion volunteered to go. But there was a problem, she was scheduled to be married! She had a meeting with her fiancé and the two families. They all agreed to go ahead and perform the marriage ceremony… without her!!! While with us in Liberia, she was married to her husband, while he was in Sierra Leone. Mary is now with us here, and her new husband is in Sierra Leone, waiting. That is sacrificial passion!! Mary says, “Time is short, my tribe must know of Christ and His sacrifice.” Her plans are to return to her husband and start a discipleship group within her unreached Muslim tribe, the tribe who had captured and hurt her.
Her story reminds me of the passion of Christ. Satan thought that his torture and murder of Christ would be his greatest victory. We all know that it turned out to be his greatest defeat. In a sense, Mary also was raised from the dead. She will soon be destroying the strongholds of Satan, through Christ. Again, what appeared to be Satan’s victory has turned out to be his defeat.

Testimony of boldly advancing into the stronghold of Satan:

Our Sierra Leone indigenous missionary team, residing within the unreached Muslim Tenme-Banta tribe, has made several visits to one of their towns. They had evangelized, discipled and baptized 60 before starting a new fellowship of believers. Our team scheduled a 2-day training there. The resident Muslim witch prophesied that our team was evil and demonic, and that if any more were baptized in her town then they would surely die. She also announced that the construction of a church building in their town would be a town curse. 30 attended the 2-day conference and 17 were baptized, a total of 77 have now been baptized. No one died and a church building is under construction.

In Margibi County, Liberia. We participated in the starting, financing and constructing of a new church. The structure is now finished. Seating is not yet complete. 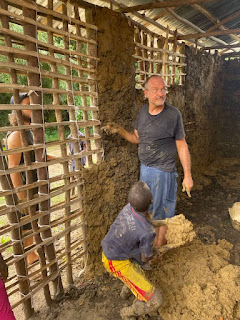 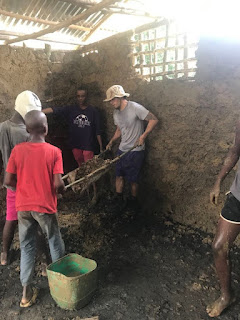 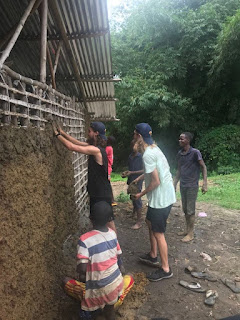 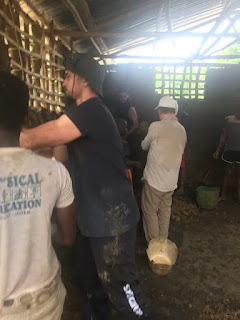 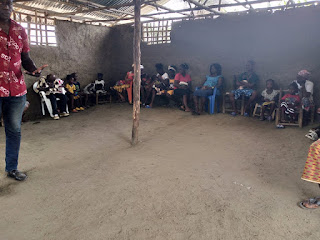 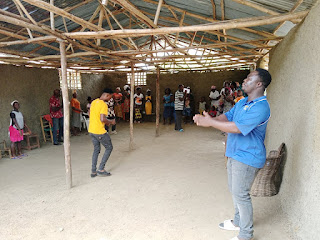 According to the Joshua Project (joshuproject.net) the countries of West Africa have 393 unreached tribes of 147 million people.  Our Lord has commanded His Church, us, to go, to present Him and His salvation to every tribe, every people and every nation. We continue to train, fruitful, proven disciples to be sent, to go, into these unreached tribes.

We have a construction project under way. Our kitchen has been a wall-less thatched roof hut. The cooks cook outside when it is not raining and crowd into the hut when raining. They have to fight off chickens, goats, ducks, pigs and human hands from making withdrawals as they cook. Also, dishes and kitchen supplies are stolen as they work. We are building an enclosed building that will properly take care of the needs of our cooks. The estimate for the project is $7,000. A donor has already covered the cost. The 1 ½ minute video shows our current kitchen and the beginnings of our project. 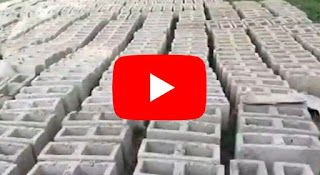 100% of all donations go to the mission. None is used for administration. Tax-deductible receipts will be sent each January.
Click here to donate online and select "PARTNERSHIP - WORDSOWER AFRICA"

Check Donations:
Please make checks payable to the “Woodside Vision Foundation” designating “Wordsower Africa” on the memo line of the check. Please include your name and address for the receipt, if the information is not already on the check. Mail to:
Woodside Vision Foundation
6600 Rochester Road
Troy Michigan 48085
If you have questions or problems with donations or want to contact me, Kim Smith, then
email me at kimlogansmith1957@gmail.com. I’m also available on the app called Whatsapp, the contact number is +231881344417

Summary of financial report for February: