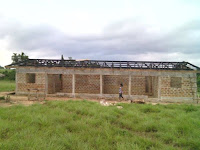 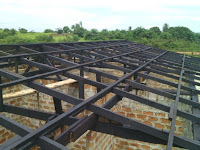 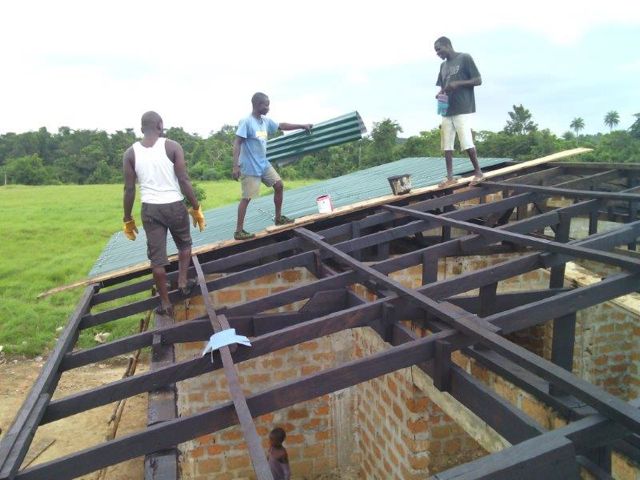 Maryland Construction Project:
The Maryland base construction project continues.  The walls are now finished for our residential building.  The roof is being worked on and should be done in August.
Wordsower Bible Institute:  We finished teaching level one in French to our refugees.
Child Sponsorship:
Currently, there are 51 children our mission is caring for.  James 1:27 says, "Religion that God our Father accepts as pure and faultless is this: to look after orphans and widows in their distress and to keep oneself from being polluted by the world."  Thank you for fulfilling this verse with us.  Praise God, last month, God provided 7 additional sponsors for our children.  Here are a few of their testimonies:

Hope’s story:
Hope was put out of school because she couldn’t pay her school fees.  The family is very poor and do not eat every day.  Hope is the third born child of four girls.  Hope’s father’s name is Joseph and her mother’s name is Mabel.  Joseph and Mabel were married until Hope was born.  Hope has one leg that is turned in therefore she has been labeled “crippled” by Liberia’s society.  Liberians believe crippled children are “devils."  They believe crippled child interacted with the evil spirit world while still in the womb.  They believe their interaction with these evil spirits is the reason they are born handicapped.  In the eyes of many, Hope is a devil and a curse on her family and neighborhood.  After Hope was born, Joseph determined to “destroy” Hope so she would not bring shame to the family.  Hope’s mother would not allow him to destroy her so Joseph left Mabel saying, “I don’t want to be with a woman capable of bearing crippled children.”  Mabel stayed single for the next 6 years until she met Kwenah.  After becoming pregnant for Nora, Kwenah left Mabel saying, “I don’t want to be with a woman who bears crippled children.”  Hope has grown up with the horrible “crippled” title.  She is shy / broken and desperately needs to know God’s love for her.  God provided a sponsor for Hope!  Please pray for Hope, her family, and the community around her.
Princess, Baby Girl, and Christian’s story:
Four years ago Princess, Baby Girl, and Christian were orphaned and moved in with their elderly grandmother.  The grandmother suffers from frequent sickness in which her belly swells like she is pregnant and then later reduces.  I don’t know the cause of the sickness but I wonder about her longevity of life.  The grandmother is widowed, all of her children have died, and all of her brothers and sisters are dead.  She and her three grandchildren are all that remains in this family.  The grandmother is too old and frail to work; needless to say, her family is very familiar with homelessness and hunger.  The best word that I can think of to describe their daily lives is, “Suffering.”  To add to their situation, Liberians are very superstitious people.  They believe that the only way a woman could lose all of her relatives is for her to be a witch.  Due to this superstition, very few people offer their family assistance.  As I look into the future, I see a good chance that these children will lose their grandmother to the sickness that plagues her.  Praise God, He has provided sponsors for all three of these children.  With God's help, we will come alongside of this family until all three children are raised.

Thank you for partnering with us through child sponsorship!
Testimonies of disciples:
Gbarnga, Bong County:
When Joseph built his house, he permanently etched Ecclesiastes 3 on his front wall.  I couldn’t help but feel the reality of this verse while ministering to his family while they were in the mists of deep sorrow and many tears.  Ebola devastated Joseph’s family.  At times, it killed 2 people each day in his house and in the houses of his family members.  By the time Ebola had finished its toll on Joseph’s family, his wife, two brothers, and all his children except 1 were dead.  Joseph and his sister-in-law were left with 14 orphaned grandchildren to care for.
During their crisis, Joseph’s family’s homes were quarantined and the community turned their backs on them.  Joseph’s family was blamed for bringing the sickness into town.  From time to time, someone from the CDC would stop by their home, standing at a far distance, they would yell at Joseph’s family asking them for progress reports.  As family members died, Joseph’s family would help carry their bodies outside the house and wait for authorities to pick them up, never to see them again.
There was a time when Joseph’s house was known as a place of death.  Now, God is making his home a place of life and a lighthouse to his community.  The house that was rejected and shunned is becoming a safe place for the community to come and hear about God’s love for them.  Joseph has become a very serious student of God’s Word and is taking his responsibility to pastor each of his grandchildren seriously.  Each morning and evening, Joseph’s voice can be heard on his porch teaching his grandchildren God’s Word.
Last Sunday, our family and some friends had the wonderful privilege of attending the first worship service Joseph held at his house.  Joseph meekly taught the story of John the Baptist and encouraged his family and neighbors to repent and turn to Jesus.
The verse Joseph etched on the front of his house is quoted from the Bible.  Ecclesiastes 3:1-8 says 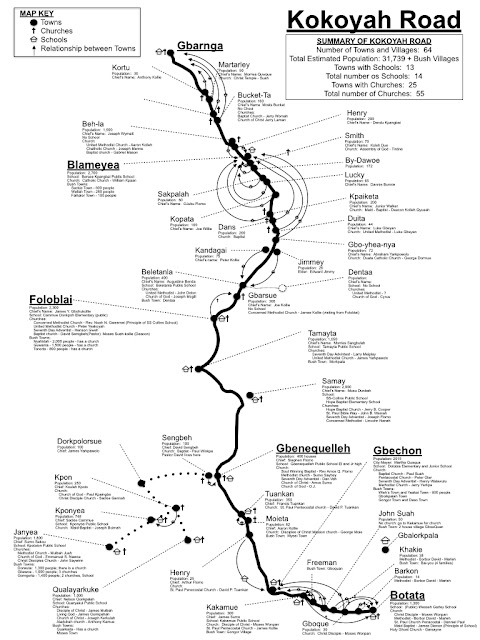 Gbechon, Bong County:
We started meeting with a man named Paul.  During Liberia’s civil war, Paul was captured by rebel forces and was beaten without mercy.  While his captors were leading him out of the camp to kill him, He prayed and told God that if God would save his life, Paul would serve him the rest of his life.  The rebels did not execute him and his is passionately trying to fulfill his vow to God.  Paul has no Biblical training and is a poor reader.  He has started a small church in Gbechon.  We have started discipling Paul and have preached one Sunday in his church.