The mission of Jesus; “not wanting anyone to perish, but everyone to come to repentance” (2 Pet 3:9 NIV), is also our mission. We pray for a healthy church in every town and village of Liberia within our lifetime. 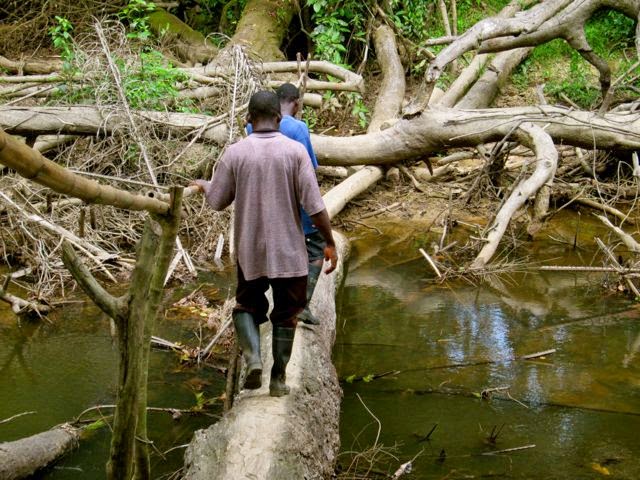 Sacrificial Soldiers of the Cross: Many of the villages are very remote.  The “bridges” are sometimes 3 small logs over a big creek.  The logs are spaced apart.  The center log is for the bike tires the two outside logs for the feet of the driver.  The logs are sometimes slick, old, and weak and they break.  Twice crossing such bridges this month the bike and driver fell.  One fall was about an 8 foot drop!  The bikes landed on the drivers in the creek trapping them, an easy death trap.  Praise God their injuries were not major.  No death.  Another driver had to put his bike in a large canoe to get to a village.  While there heavy rains sunk the canoe causing problems on his return.  This is the rainy season. There were many wrecks, and some of our disciples were wounded and bikes were damaged. 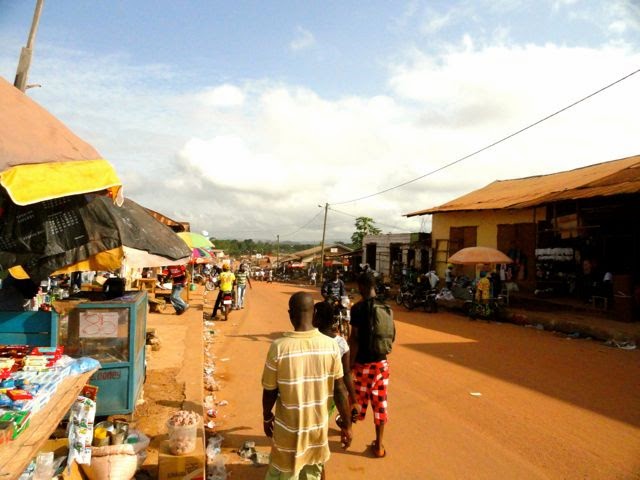 Ebola and Gbarnga, Bong County:  Delka, his wife and 2 young children are manning our new base in Bong County.  Where they live is a serious hotspot for Ebola.  Gbarnga, the capital city for the county, has several communities under isolation.  Gbarnga is in chaos and a very dangerous place to live!!  Please be in prayer for them. 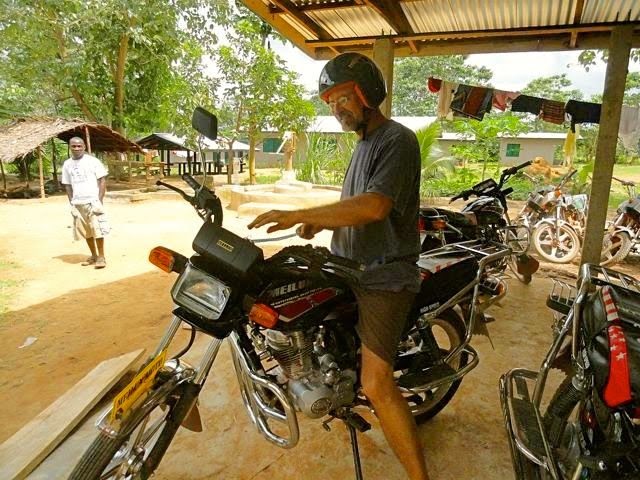 Panic Increases:  One morning at about 5:00 AM I was taking a man, on motorbike, to town to find him transport to the next county.  On our way in the rainy darkness we came across to 2 gangs, at different points, blocking the street, waving machetes and yelling for us to stop.  Each time I chose not to.  One grabbed the handle bars and jerked trying to cause me to wreck, but I was able to recover. After passing the gauntlet we inspected ourselves.  No injuries or damage.  I waited until daylight to return home.

The Gift of Tongues:  One of our powerful illiterate field leaders, Paulina, gave this testimony: She had come from Ivory Coast and could speak a dialect and French but not English.  She was frustrated to not be able to communicate the Gospel to the Liberians.  She wept and prayed throughout the night.  The next morning she knew English!  George, one or our interior church leaders, was illiterate.  Through prayer and the teaching of the Holy Spirit he is now literate, no human teacher.

Zwedru’s Ebola Isolation Camp:  Zwedru has an Ebola isolation camp.  It currently houses 9 who are under observation.  No one has shown signs of the sickness but each was with family members who had died of Ebola.  I have been allowed to enter for Bible distribution and teaching.  Of course, I have a captive interested audience!  They are eager to hear the Gospel of Christ and how to gain their salvation.  I have been going to them almost every day.

One Testimony of Many:  Mohammad, a Muslim and former high ranking rebel solider, met WSL while in prison.  He participated genocidal massacres in Serra Leon (remember Blood Diamond?). Upon his release from prison he came to us.  We have been giving him yard work and been teaching him about Christ and salvation.

Wordsower Bible Institute:  Our school has been closed.  The president has announced a State of Emergency.  All schools have been closed throughout the country to help to stop the spread of Ebola.  We do not know when the state of emergency will be lifted and schools allowed to reopen.

Prayer requests:  Pray for Liberia!  Pray that this Ebola plague will bring many to repentance and salvation.  Pray for a great revival to sweep through this country.  Pray for a healthy church in every village in our generation, that every Liberian can walk small and find a healthy church.   Please make this prayer part of your daily prayers.  Our roads have been blocked to stop the spread of the disease.  We need Bibles, paper and press supplies from Monrovia, the capital.  Pray that our Lord will give safe passage of these essential supplies.
Month's Statistics:
- Went on 107 Mission Trips
- Visited 129 villages
- Went into 32 new communities
- Baptized 21
- 53 completed extensive Bible Study program
- 4 marriages
- Printed and distributed 122,000 pages of training material
Several factors affect how many mission trips we can go on each month; illness, injuries, and availability of money are some.

Villages, towns and cities we have been working in:


Posted by Wordsower International at 9:19 PM