“From the days of John the Baptist until now, the kingdom of heaven has been forcefully advancing, and forceful men lay hold of it.” Matt 11:12

Wordsower Liberia exists because our Lord has called and united a team of obedient disciples who have all sacrificed.  You are a part of the team by praying and participating financially.  Money you earn could have been spent on selfish desires, but instead was given towards an everlasting harvest. These who go on the bikes to the villages would not be able to do it without your participation.  The harvest is truly plentiful.  The workers are us; the united, the sacrificial, the faithful, the obedient. Let us continue to pray for even more laborers here in Liberia and supporters abroad.  I believe that as we unite, we will be utterly amazed, far beyond our dreams, at the harvest that will come from our obedient sacrifice.

“The Lord has assigned to each his task. I planted the seed, Apollos watered it, but God made it grow.  So, neither he who plants nor he who waters is anything, but only God, who makes things grow.  The man who plants and the man who waters have one purpose, and each will be rewarded according to his own labor.” 1 Cor 3:5-7

You see our monthly reports, sometimes skimming them in haste of other things. You see the numbers. Numbers on paper create small effect. Below is a story from within one of those numbers.
The team in the pictures below left their mission in Grand Bassa County at 3:00 in the afternoon to return to our base. They arrived at 9:00 in the morning. The following day they drove throughout the night for 18 hours on a bad road. They suffered, wrecked, bled, were bruised, were in danger, risked, slept for a few hours on the ground in a village, and returned rejoicing!!! Mission accomplished! The Gospel of Christ and His word of Salvation and hope was taught and preached!!!  For that, the team - you and I - joyfully sacrifice and greatly suffer.  You read in the report that we went on 86 missions to 139 villages, without knowing the cost. 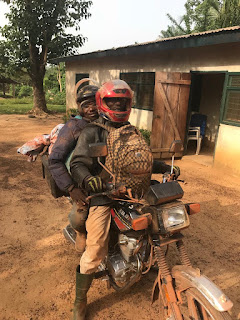 United, each team member doing their assigned task, forcefully advances the Gospel of our Lord.

I have been reading “Letters to the Church” by Francis Chan.  He says,

“We pursue Jesus, and suffering always accompanies Him. As believers, we spend our days pursuing Christ Himself, Christlikeness, and the mission of Christ, none of which can be done apart from suffering… As we are fixated on and obsessed with our pursuit of Jesus, we know suffering and persecution will come at us from all sides…Part of the reason we have created a culture of non-committal Christianity that avoids suffering is that we don’t treasure Him enough, we don’t love the lost enough.  We want Jesus, but there are limits to what we will sacrifice for Him, for His mission, for the lost.  We want Him, but there are also lots of other things we want in life…We are to fall in love with Him, to the point where it actually becomes a joy and desire to give our lives to Him in return.”

Paul said, “What is more, I consider everything a loss compared to the surpassing greatness of knowing Christ Jesus my Lord, for whose sake I have lost all things. I consider them rubbish, that I may gain Christ and be found in him… I want to know Christ and the power of his resurrection and the fellowship of sharing in his sufferings, becoming like him in his death, and so, somehow, to attain to the resurrection from the dead.” Phil 3:8-11.  “Paul was obsessed with knowing Jesus, he even wanted the fellowship of sharing in Christ’s sufferings… There’s a level of love we can reach where we actually grow to want that.  To want that type of intimacy, where you feel as if you were nailed right there next to Him.  You could lose everything - your reputation, comforts, possessions - and count that all a bunch of trash, because it is all worthless compared to knowing Christ.” *

Our Weapons used in February:


Participate with us in Praise and prayer:

100% of all donations go to the mission. None is used for administration. Tax-deductible receipts will be sent each January.
Please send donations to:
Wordsower International
16960 Sidney-Plattsville Rd
Sidney, OH 45365

Posted by Branton Hoblit at 7:36 AM